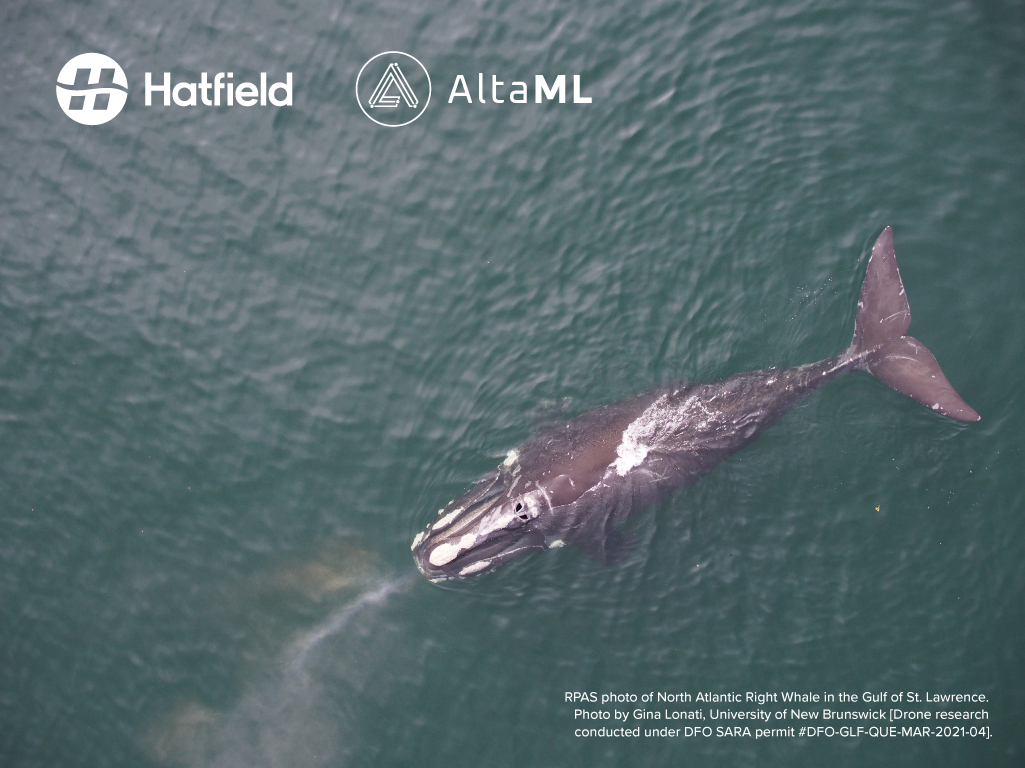 Vancouver, BC and Edmonton, AB, March 15, 2022 – Hatfield Consultants, a leading environmental consultancy, and AltaML, a leading applied AI studio, are excited to provide an update on the smartWhales Space-based Detection System (SBDS) project, in development under the Canadian Space Agency smartEarth initiative that explores new techniques to further protect and help conserve North Atlantic right whales. With the support of the Canadian Space Agency, Fisheries and Oceans Canada and Transport Canada, the goal of the Hatfield-led smartWhales SBDS consortium is to develop an artificial intelligence (AI) model that will use satellite data to help detect and monitor North Atlantic right whales in Canadian waters in near real-time, which could support the protection and conservation of the endangered species.

North Atlantic right whales are very rare, with an estimated 336 left in the world. In the last five years, Fisheries and Oceans Canada and Transport Canada have put in place extensive measures and a variety of tools to detect and monitor the presence of right whales in Canadian waters. The use of satellite data is one of the many innovative options that are being explored to track and monitor North Atlantic right whales to support their conservation. The smartWhales project brings together expertise in high-resolution space-based satellite imagery, AI, geoscience computing, and marine biology to develop a solution that will automatically detect the North Atlantic right whale in large datasets of satellite images off the Gulf of St. Lawrence – a needle-in-the-haystack task beyond human capability. 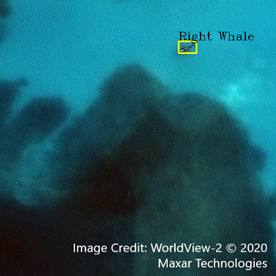 The project team has acquired some great satellite imagery of the North Atlantic right whale and other whales, and has supplemented these satellite images with pseudo-satellite data through data augmentation techniques, as well as drone-based photographs taken by consortium members Dr. Kimberly Davies and Gina Lonati at the University of New Brunswick. These training data have enabled the development of a SBDS prototype.

In the coming months of 2022, Hatfield and AltaML will benchmark the performance of the AI model in detecting North Atlantic right whales using the augmented images and compare it with models trained only on the available satellite images. A prototype AI model will be tested during this pilot project using new satellite image acquisitions during the spring and summer of 2022.

“This new AI capability to detect whales in open ocean in an image acquired from space – a needle-in-a-haystack challenge – is very promising. Hatfield is very excited to enter into the prototype testing phase of the project this summer and will continue to work with our amazing team of scientists and AI experts to provide insight into North Atlantic right whale conservation,” said Olivier Tsui, Project Manager and Associate Partner at Hatfield.

“AltaML is proud to explore future technologies that could support the conservation of the North Atlantic right whale through applied AI, in collaboration with Hatfield and our consortium partners,” said Nicole Janssen, co-CEO of AltaML. “The level of difficulty on this project cannot be overstated, and the team has demonstrated extraordinary ingenuity in developing a dataset of images to be able to tackle the problem. We look forward to continued progress and ultimately to the potential of this approach as a blueprint for applied AI in the conservation of other endangered species.”

The smartWhales Space-based Detection System is undertaken with the financial support of the Canadian Space Agency and Fisheries and Oceans Canada, in collaboration with Transport Canada.

About AltaML
AltaML is an applied AI studio driven to elevate human potential, and builds relationships founded on shared beliefs around using AI for good. This work includes accelerating the AI adoption journey for organizations in the private and public sectors as well as growing a portfolio of industry-specific joint ventures to pursue product opportunities. In addition, AltaML operates talent accelerators to increase the pool of industry-ready data science talent while driving partners’ AI experimentation. AltaML is scaling rapidly to become a global leader in responsible AI with offices in Edmonton, Calgary and Toronto.

About Hatfield
Hatfield is a privately-owned, multidisciplinary company providing consulting and applied research services in environmental, social, and geomatics sciences to public and private-sector clients. We are technical leaders in the use of remote sensing and geospatial technology to acquire, manage, and analyze data to deliver projects and strategic insights for environmental monitoring and management. We regularly support international space agencies, international finance institutions, and major energy and mining companies with scientific and strategic consulting and data analytics. Hatfield has office locations across Canada, including North Vancouver, New Westminster, Terrace, Fort St. John, Calgary, and Fort McMurray, and internal offices in Indonesia and Botswana.

To learn more about the NARW visit Canadian Wildlife Federation
With an estimated 336 left on our planet, North Atlantic right whales are a very rare, large baleen whale whose population has experienced a significant decline in recent years due to collisions with vessels and entanglement in fishing gear. Considered a protected species in Canada (under the federal Species at Risk Act) and the United States, conservation efforts of the North Atlantic right whale are of high priority.

Dr. Sean Brillant –Senior Conservation Biologist for Marine Programs at the Canadian Wildlife Federation (CWF). Leading NARW researcher on projects focused on fishing gear entanglement prevention and impact of vessel strikes, including development of models to predict when and where they might be at risk.